5 Ways to get advantage on attack rolls

In combat, getting advantage on attack rolls could be the difference between claiming the dragon’s horde or rolling death saves.

I have been on both sides of the DM screen and seen dozens of circumstances where rolling two d20s was a matter of wording in the text.

With so many ways to make combat lean in your favor, I combined them into five specific categories.

Conditions are factors that alter a creature’s state of being or state of mind and are generally considered an impairment for the creature.

When a creature is blinded, paralyzed, petrified, prone, stunned, or unconscious, you have an advantage on attack rolls against that creature.

Some of these conditions require a little more specific circumstances, such as an attack against a prone creature needing to be with 5 feet to be made at an advantage, otherwise, it will be made at a disadvantage. Makes sense. A lot hard to shoot an arrow accurately when the target is flat on the ground.

Some other considerations include that an attack against a paralyzed creature within 5 feet counts as a critical hit (big ouch). However, you still have to hit the creature with an attack roll successfully.

And even though it is easier to strike against a petrified creature, they have resistance to all damage, meaning they take only half of the total damage you deal. I wouldn’t suggest trying to swing a metal bat at a brick wall, but I can say that half damage is generous in your favor.

Not only do conditions grant some options for advantage, but strategic placement in combat could make that dagger through a little more accurate for the sneak attack!

Creeping around corners is more beneficial than one would assume because if a creature can’t see you, you gain an advantage on an attack roll you make against them. So moving through the shadows, epic camouflage in a forest, or just jumping on them from the roof while screaming (quietly) all make for a little increase in odds.

That explains why being invisible is so great, so those years of youtube tutorials on makeup might work out when it is time to sneak into a cult dungeon and attack the cult leader.

However, my favorite environmental bonus is a delightful little visual. Imagine you are a white rabbit making your way through a small door, and a giant girl has chased you through. As a large creature, she is trying to squeeze through a medium size door which means all attacks against her are made at an advantage.

Off with her head!

This one could be more useful for players. Still, it can be if the character gains some fun traits or if the party happens to collect that cute demonic creature from the last adventure despite it threatening to consume each of their souls. No judgment.

Some of the most common traits found with a handful of creatures include ambusher, blood frenzy, reckless, or pack tactics.

Ambusher is a favorite against a party that forgets to have someone keep watch, where the monster has an advantage on attack rolls against any creature that is surprised. However, best be careful when it is your birthday, someone might be setting up an advantage when you are getting home.

Blood frenzy works narratively with creatures that like to eat people, like sharks, where they have an advantage on attack rolls against any creature that does not have all their health points. Yeah, that means even a 1 damage could amount to an entire encounter where the monster is furious and efficient. But at least this only works on melee attacks.

Reckless is similar to the barbarian feature, Reckless Attack, where the monster can give itself an advantage on melee attacks for the turn. High reward, but at the risk of every attack roll against it is made at an advantage until the start of its next turn. So make it count, right?

Finally, the fan-favorite pack tactics. This is fun because as long as the monster has at least one ally, who is not incapacitated, within 5 feet of the target, the monster has an advantage on attack rolls against the target. But, of course, this is the danger of dealing with a group of wolves, a band of ruffians, or well-coordinated toddlers who saw you eating a cookie.

Of course, there is little that magic can’t do when it comes down to it. There are dozens of spells that inflict conditions, change a creature’s size or form, shift the environment, and make people invisible. However, there are a few spells that require distinct mention.

Imagine seeing the attacks and using that to make your attacks a little more accurate. It takes an expert detective with nearly magical mental skills. Introducing the power of the 9th-level spell foresight. It gives a creature advantage on attack rolls, ability checks, and saving throws for up to 8 hours! How easy it would be to avoid awkward social interactions with this power.

On the other side of the spectrum of power is the cantrip, true strike, which has everyone ultimately against it. The spell requires an action to cast and gives you an advantage on the first attack roll you make against the target. It also requires concentration.

Generally makes this an ineffective use of a cantrip, but then again, perhaps this spell is meant for those arcane monsters with legendary actions.

My personal favorite is where DJ Otto pulls out his magical speaker and plays a jam that only the target can hear. This song is so catchy that the target must start dancing wildly, and it doesn’t even require a save at first. The 6th level spell, otto’s irresistible dance, is one that truly is a killer at parties. So much so that everyone has an advantage on attack rolls against the dancing creature. Honestly, it might have been better to get Rick Rolled by dissonant whispers.

How can you say no to the rogue who saw their uncle that killed their parents, setting them on this dark road of vengeance (or another rogue-appropriate dark background)?

When in doubt, swing about

Take your weapon, swing when the moment feels right, and see if you get an extra d20 roll.

Do you favor any methods of gaining an advantage?

Any special rules that you know of or made that make your table more exciting?

Join the discord, chat about your experiences, and find new ways to gain an advantage. 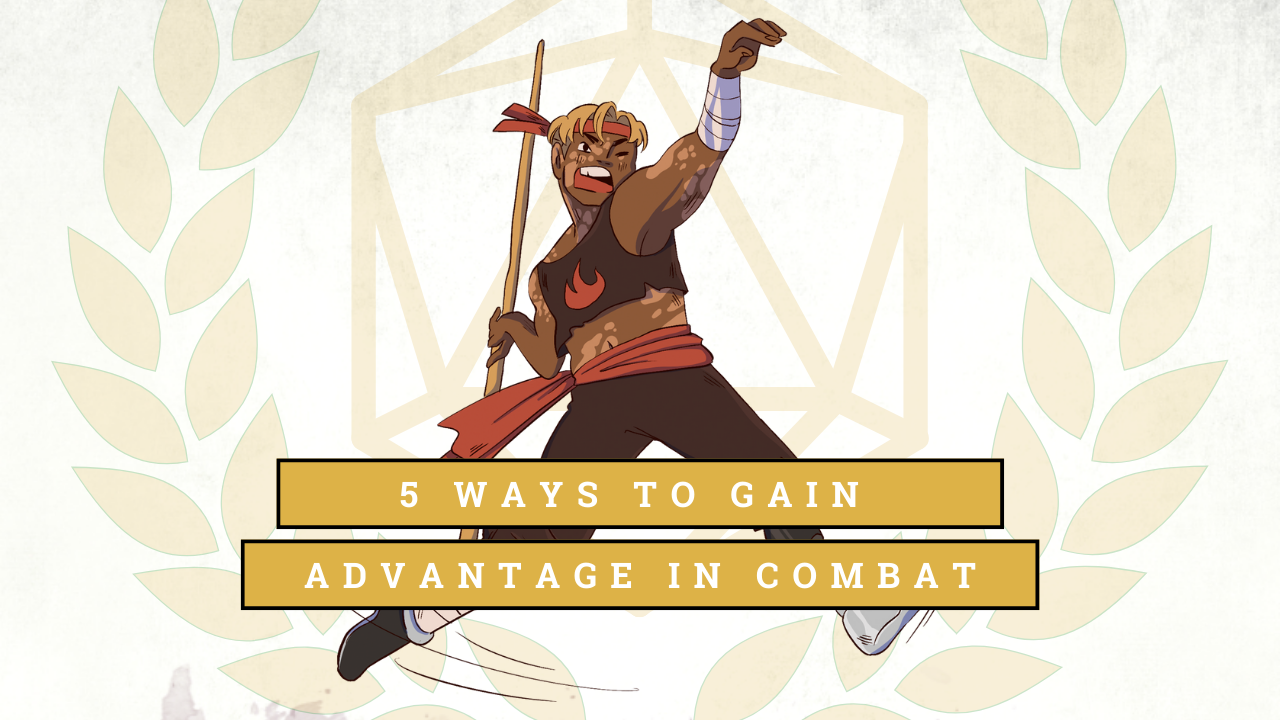 Next post The Art of Pacing: Using Up and Down Beats

Ancestry and Culture: A D&D 5E Alternative to Race

When looking for a Game Master (GM), be aware of red flags...